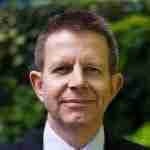 (Please allow up to 2 minutes for the MP3 download)

Nick – Thanks Michael, my name is Nick Bush and I’m an independent consultant and I help organisations clarify and organise their strategies and their business transformation.

Michael – What experience do you have that gives you credibility as a change agent?

Nick – I spent around about ten years in working in the area of change management – business reengineering, transforming IT departments, and various other functions – as a consultant, and then for the last nine years I’ve been putting into practice those techniques, whilst working for a large UK telecoms provider.

Nick – I think that’s a very interesting distinction to make. I think we can define a change project as a project in which you’re changing an aspect of your business or organisation over time, and like any project it’s got a start and an end date, and some measures of success. But the distinction between that and a transformational change project is that a transformational change project is one where you’re changing your organisation so it is completely different from the one that you set out with.

So, if for example, you’re a large telecoms company and you have a legacy of working primarily as a telephone services provider, and then over the years you make the transition to the world of internet and broadband, and then ultimately to IT and home entertainment services. As we can observe in the UK market today.

Michael – If you’re advising a key sponsor at the beginning of a change or transformational change project about how to maximise the projects success, what tips would you give them right at the beginning?

Nick – I think that before you look at that, a really frank conversation is needed with the sponsor, to really understand if he or she is really up for this. If it’s a transformational change project then it’s immensely easy – and I’m just as guilty of this as anybody else – to underestimate the scale of the effort and investment required to make a major or radical change.

And also, for the sponsors themselves, they’re very likely to have to go through a rather profound personal transformation because if you’re seeking a really radical way of changing the way that an organisation works, then it’s very likely that whatever’s brought them to this leadership and success that they have today, is probably inappropriate and insufficient to bring them into the new challenges that they’ll soon be facing.

Michael – Would you talk bit more about that?

Therefore it doesn’t really filter down effectively to the people who are actually able to put into effect that change.

Michael – What do you think are the biggest reasons that change projects fail?
Nick – I think that there are about five in total – I’m sure that if I thought about it some more I could come up with a lot more! But this issue of sponsor engagement is absolutely fundamental, as I said before.

And in one project I was running, we did have the are you up for this? conversation about three months into the project. It was at the point where we had done enough analysis on the problem to articulate the degree of transformation required, and where the efforts really needed to be focused.

At that point the sponsor, because of a number of things that were happening to them elsewhere, backed a way from it and took a path that was less radical and less aggressive, and obviously didn’t achieve the results that we thought that they could achieve.
So that’s the key thing to get right – and then to ensure the sponsor then stays engaged all the way through the process.

The second one to get right is – it’s very easy to think that it’s enough to communicate in one way, with people who are effected by the change and not get and listen to their feedback, and indeed not get their ideas about how best the change can be effected within the organisation.

Another area where things can go wrong is in the area of symbolic and tangible change. People need to see a change effort take effect quickly, or some effect so that even if the overall goals of the program aren’t achieved, then there will be some symbolic or tangible change in the way things are organised. So people say ah yes, we’ve started! This is a different era that we’re now moving into.

Michael – What else is there? You’ve got the sponsor one, carrying the message to the stake-holders, you’ve got this symbolic and tangible change, what else do you think is important?

Nick – I think another area to get right is giving people enough tools to effect a change. So that’s both in terms of a sensible structure of progress for putting a change program across, so that could be something as obvious as a change office that’s very visible, with different referencing tools, and rules of engagement for anything else that’s happening within the organisation – and when I say tools I mean the changes in procedures, and maybe the ground rules of an organisation, as in what happens, and what is acceptable behaviour.

You might have an organisation where it’s not the done thing to challenge what the senior manager says – so if you want to change that culture, to make it much more participative, to make means accelerate more quickly – and I say it, though it sounds ridiculous that an organisation might actually have to do this – but you might have to demonstrate how this could be done through demonstrative role play, or whatever.

Michael – any other reasons?

Michael – What do you think the value of a good change agent is? That’s not the sponsor, that’s the guy that’s the catalyst in the middle of it all trying to make it happen.

Nick – Well many years ago I got a degree in Chemistry, so I know all about catalysts – I’m always desperately thinking of a metaphor that’s perhaps a bit more original – but it’s a good one, a change agent is literally a catalyst that cause the right kind of reaction to occur. And anyone that’s any good at chemistry will know that there’s two types of catalysts, there’s the ones that get used up during the reaction, and those that remain the same – and obviously you’ll want to be a little bit of the one that gets used up, but primarily the one that remains the same, hopefully learning from the experience.

But the main thing for the agent is that when they leave there’s a very strong ownership to the point where – and it’s always hard to do – where you’ve become an irrelevant. So there are points when you’re not needed anymore. There different change agent roles within the organisation – leading the change, enacting the change and then reinforcing the change as the program or project continues.

Nick – I think that the best thing that a change agent can do is to, and it sounds passive to say, is to reflect back to the organisation what they’re doing, and you’re almost there to hold them accountable for the changes they’ve agreed. And also to provoke, to do the thinking ahead that an organising can’t do because they’re still embedded in the various ways that current way of doing things. They have to challenge both the progress of the change, and the validity of goal that they’re growing towards, Again, you’re being a catalyst, but one that might be uncomfortable to have around if you’re doing a job properly.

Michael – What difference do you think a good change agent makes to the project?

Michael – Before I ask for your contact details, is there anything that you’d like to add that you think is important in change?

Nick – Yes, the fundamental change that you’re trying to make in any change project is to liberate the creativity and initiative capacity in people. I was looking at something by Gary Havel from London business school, who’s promoting the idea of management innovation, very firmly at the moment, and I think some surveys that he’s carried out say that most people would say that they only get 60% at best of people motivation, and passion of people in their day jobs.

So there’s a great untapped resource out there, for people to bring in much more in terms of creativity and input into their daily work, and a good change effort will seek to raise the game of an organisation in terms of it’s innovative capability.

Nick – My email address, it’s nick@openchord.co.uk and my website is Open Chord Ltd

Michael – Excellent, thank you very much.

Nick – Thanks a lot Michael.

Back to NLP Change Management